This case study describes a major maintenance project at an iron ore mining site in Port Hedland, Western Australia. The client is a world-leading resource giant that mines and processes vast quantities of high-grade iron ore for supply to customers all over the globe. The focus of this study is on the outstanding service provided by Norbar Technical Services (NTS), who was contracted by the client to complete bolting maintenance tasks as part of the mega shut-down that took place in the second half of 2020.

The client has invested in complex automated systems that can process enormous volumes of iron-ore rapidly and efficiently. Scheduled downtime is necessary and can be budgeted for, however unscheduled downtime can have a significant impact on productivity. Not only the running cost of idle equipment, but in severe cases, it can lead to late delivery of ore to end customers.

This makes one thing apparent — time blow-outs and unscheduled downtime should be avoided at all costs. Maintenance must be scheduled with the correct frequency to avoid unplanned equipment failure, and with reputable sub-contractors who will complete the task quickly, accurately, and safely.

The target of the mega-shutdown was a rotary railcar dumper. Railcar dumpers are used in automated bulk-handling operations to improve efficiency, and are employed in the mining industry to quickly move commodities around a site for storage and transportation.

The clients’ equipment (railcar dumper #3) is a tandem dumper that can receive two railcars simultaneously for increased unloading capacity. The dumper consists of a rail platform that rotates approximately 180°. Two railcars are moved in, secured and then rotated, discharging their contents into a silo below. The rotation action is provided by a mechanical drive that rotates rack gears housed within end rings (in this case, two cells for a total of four end rings) which are assembled with a circular array of hundreds of bolts.

The equipment needs to be able reliably perform thousands of dumping cycles in between maintenance operations, with typical routine maintenance being carried out monthly.

Larger scale strip-downs are scheduled periodically, and are a significant event that requires detailed planning and numerous skilled personnel in order to run smoothly. Getting the equipment operational within the budgeted time is critical, as an out-of-action railcar dumper can cost up to one million dollars per hour.

Image: A large number of bolts in a circular array on the railcar dumper ring rail.

A significant part of the strip down process is the removal and replacement of the ring rail and drive track bolts. Each and every bolt is torqued to a specified value (up to 1600 Nm, depending on the bolt), with up to double that value needed in order to remove some bolts during strip down.

Initial removal is difficult due to access restrictions but not to technical. The alignment of the ring rails is more complex and demanding. In a nut shell bolts are tightened, loosened and re-tightened several times whilst the rails are aligned to each other and to the machine shell.

The final stage of torquing, measurement and adjustment is the most technical but ultimately where we provide biggest time savings and long term reliability of the rails.

Problems identified in the previous strip down

In the previous strip down, the client encountered the following problems and limitations:

When the strip-down was completed previously, the contractor ended up running three weeks behind. Whilst this was not as a direct result of the re-torquing task, it did highlight the benefits of subcontracting specialist tasks to experienced crews.

Safety concerns associated with the bolting task include the typical risk of pinch points, but also the risk of shattered sockets causing projectile / flying debris.

In the previous strip-down, torque sockets were improvised so that they would fit into reduced space around the assembly bolts. These sockets were adapted by turning down the outer diameter of existing sockets. While this solved the bolt access problem, approximately 20 of the improvised sockets shattered during use and were dispatched to the scrap bins.

Norbar dedicated time early in the project to extensive pre-planning. During this stage, Norbar identified key steps and personnel needed to complete the operation. The plan drew on over 30 years of field experience and was developed to directly address the risks and inefficiencies identified by the client in the previous shut-down. Norbar assigned a crew of 19 personnel for the project — 3 supervisors, 8 ultrasonic bolting specialists, and 8 bolt torquing technicians.

As part of pre-planning, Norbar identified key areas for improvement, defined the tools and equipment needed for the job, and outlined the steps needed to complete the bolting task from start to finish. This was to ensure the project went as smoothly as possible once on-site.

Norbar identified the following important areas to improve upon, based on the clients experiences during the previous strip-down:

Accurately measure and log the tension applied to 100% of the bolts on the ring-rails and track rails.

Develop custom sockets that would allow torque equipment to reach difficult to access bolts without shattering, and in the correct socket sizes.

Provide the technology to achieve the exact torque angle needed from 600 Nm to a maximum of 1600 Nm, and to confirm the bolt elongation with ultrasonics.

2 Define the Steps of the Bolting Task

Clear steps were defined for each bolting sub-task:

2. Replace the ring rail bolts with new, individually numbered bolts. Using the EBT and Boltstress G5 ultrasonic bolt tension monitor, each bolt is tensioned, measured, and then re-tensioned until the correct tension is achieved. Log the elongation of each numbered bolt.

4. Replace the drive track bolts and torque using the EBT torque and angle system to the required tension (pre-proved in workshop trials)

3. Specify the Tools and Equipment Needed

Tools and equipment were specified for maximum reliability and accuracy:

Custom engineered sockets — A set of torque sockets was engineered by the Norbar mechanical engineering team. They featured a reduced external diameter designed to fit into the limited space around the bolts. Strength was maintained by increasing wall thickness in the socket where space permitted in order to reduce the likelihood of shattering. This resulted in 30% higher socket strength.

Boltstress Ultrasonics G5 ultrasonic bolt tension monitor — Accurately measured the tension applied to the assembly bolts to guarantee joint strength. This technology allows the technical crew to zero-in on the bolts that need to be adjusted.

The specialist ultrasonic Boltstress monitoring both improves accuracy and significantly reduces time by allowing the operator to see exactly which bolts need adjustment. Torque to tension is ± 25% at best, ultrasonic bolt stress monitoring is within 2%.

This gave outstanding improvements over the previous method using micrometer or verniers where only 10% of bolts were measured, with the G5 allowing time for 100% of the bolts to be measured and logged. This process provides assurance that the torque values are within their ideal range, and provides the client with the option to track bolt health over time as part of their Quality Assurance process.

The Norbar crew took 75% less time to do the re-assembly than the client had allowed. NTS completed each ring in only 6 hours per ring which 18 hours less per ring than the budgeted 24 hours per ring.

Custom engineered sockets performed reliably for the duration of the operation with zero shatter.

While the Norbar crew were onsite, they assisted with additional tasks that were not included in the project scope. During the preliminary set up of the shut-down, Norbar assisted with loosening the bolts on the Ballast beams to ensure the cells could be safely lifted from their housing.

The experienced NTS crew think on their feet to solve immediate problems as they arise. During the operation, it was discovered that the incorrect bolt size specification had been provided to Norbar in the pre-planning stage. The crew solved this on the job by creating the correct socket, allowing them to continue with the bolting task and avoid holding up the project.

Find out more about these products & services:

Learn more about our torque tools and other products: 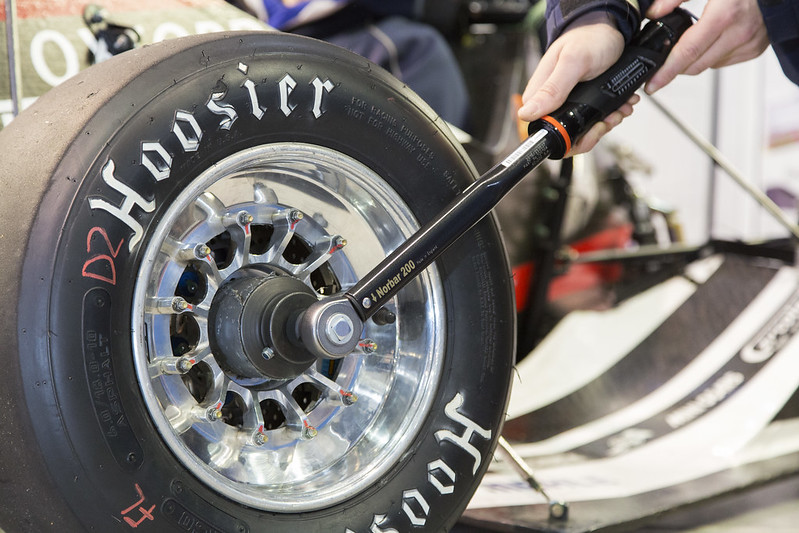 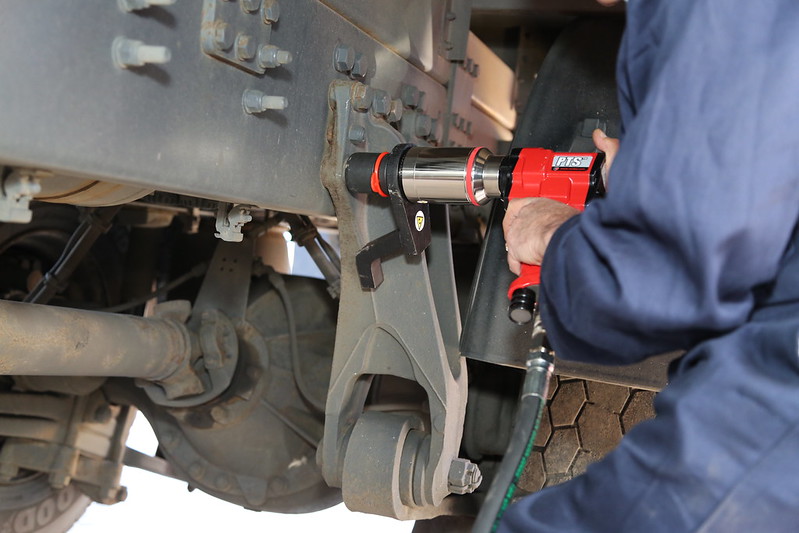 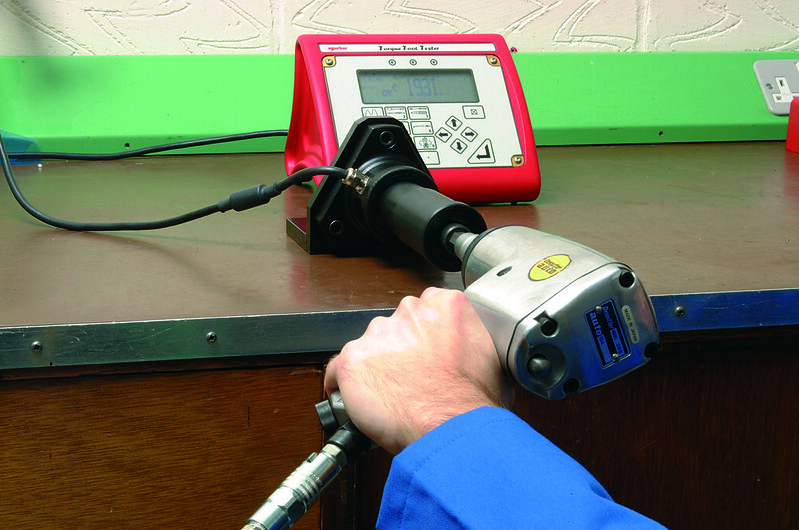 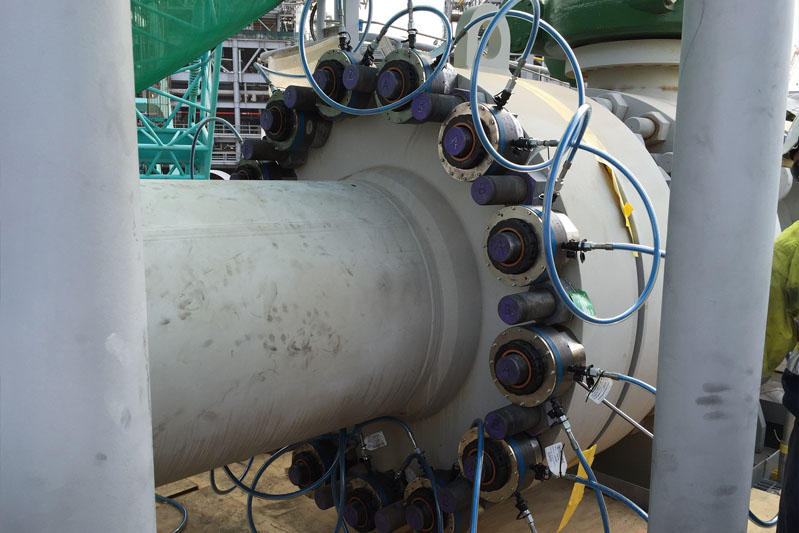